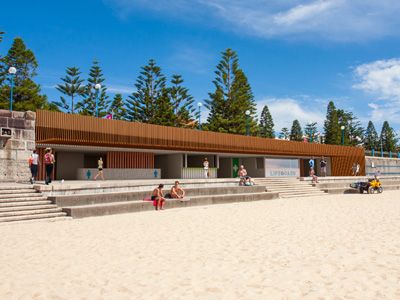 Randwick City Council has developed plans to construct new toilets, showers and change rooms on the lower promenade of Coogee Beach, next to the lifeguard offices.

A development application for the large scale project has been lodged this week and if approved, construction could start immediately after the next summer season.

The proposal comes following ongoing concern that the existing toilets on Goldstein Reserve, near the Arden Street bus stop are not enough to cater for the Coogee Beach crowds.

"With millions of visits to Coogee Beach every summer, building additional toilets and change facilities on the lower promenade, closer to the sand and sea makes a lot of sense.

"Last year we consulted with the Coogee community on a number of town centre projects and one of the most pressing issues raised was the availability of public amenities, particularly during summer," Mayor Seng said.

"At the moment, each year, we need to bring in temporary toilets to alleviate the pressure on the existing toilets in Goldstein Reserve, so a more permanent solution is definitely necessary."

The Coogee survey, conducted in May 2014 highlighted that:

"We believe the lower beach promenade is the right place. The plan proposes that the facility be built into the promenade (under Goldstein Reserve) without taking away any open space from the park. And, maintaining the existing toilets on the reserve will effectively double the capacity," Mayor Seng said.

The development application has been lodged and will be on public exhibition from 6 May 2015. Given the extent of the project, the application is likely to be accessed by the Joint Region Planning Panel (JRPP).

Consultation has concluded. Thank you to all who participated by completing the survey or taking part in one of the focus groups. The reports of the survey and focus group are now available on this website